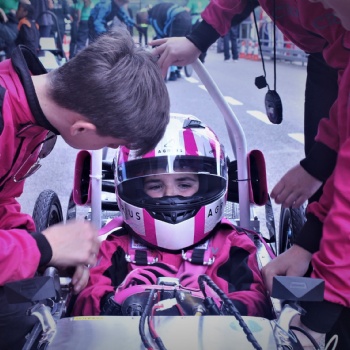 The Greenpower Charity aims to inspire an enthusiasm for Science, Technology, Engineering and Mathematics (STEM) subjects in young people. Engineering is one of The Bourne Academy’s specialisms and, as such, the students have enjoyed being involved with the Greenpower project. Our dedicated team have spent several months designing, building and trialling their F24 Greenpower racecar named The Bourne Bobcat, ready to compete in regional heats at the Goodwood Race Circuit.

Local company, Kingren Groundworks Limited, has proudly sponsored The Bourne Academy’s Greenpower team, enabling them to purchase branded safety helmets, gloves and racing/pit suits. The team really looked highly professional in pink and black, narrowly missing the top spot for Best Presented Team. They competed against hundreds of teams of 11-16 year olds. In three laps one Bourne driver moved up to 17th position out of 82 starters; all drivers on the team handled the car exceptionally well.  The majority of competitors on the circuit were from private schools.

Mr Binstead, Academy TED Technician, commented, ‘Whether manager, driver or pit crew, everyone performed brilliantly on the day and had a fabulous experience. The Bobcat team showed great character and camaraderie, laughed a lot, applied themselves to the tasks that needed to be done and remained professional to the end.  A huge thank you must go to our sponsor, Kingren Groundworks Ltd, for such generous support.

The Bourne Academy Greenpower team looks forward to the next race at Castle Coombe in September.