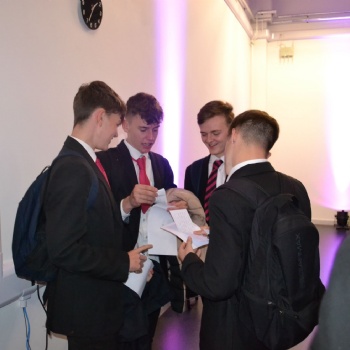 The Bourne Academy has launched a new initiative to encourage Year 11 students as they reach the summit of learning before GCSE exams begin. At a time when students are really feeling pressure, we wanted to emphasize how proud we are of them.  Last term, we wrote a secret letter to parents/carers letting them know about the initiative and inviting them to write a letter to support their child at this crucial time.

Parents, carers, siblings, wider families and Academy staff wrote individual letters to each student in Year 11 filled with words of encouragement to support students as they head into the exam season. The ‘proud letters’ were kept confidential, which added to the emotion when they received their surprise letters in an Assembly last week; the letter opening was accompanied by champagne flutes filled with pink lemonade together with specially decorated cupcakes.

Mrs Leech, Assistant Principal says ‘Our Year 11’s received motivational letters from family and staff letting them know just how proud we are of them both in terms of the effort they have put in over the last two years in the run up to their exams and on what fantastic young people they have become.  As you can imagine this was a very special and somewhat emotional event.  Our thanks go out to everyone who wrote a letter.  This will help spur students on in that last push towards their exams.’