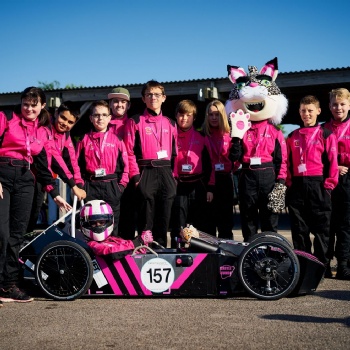 The Bourne Academy came 18th out of 57 competing teams in the most recent national Greenpower race and, most notably, the team won ‘Best Presented Team’ overall on the day.

This year marks the 20th anniversary of the Greenpower Education Trust, a UK based charity inspiring young people to excel in STEM subjects and careers in engineering. The Bourne Academy entered their first Greenpower event in 2012 with the support of the team from Canford, The Bourne Academy’s sponsor school. Canford School bought the first kit car ‘Bourne Bullet’ for The Bourne Academy, kick-starting a fantastic opportunity for students.

The Bourne Academy’s Greenpower Team attended the season opener race at Goodwood Race in May with their carefully crafted and finely engineered racing car called the ‘Bourne Bobcat’ – this car represents two years of  special design, hard work and self funding – it was built and welded from scratch in the Academy’s engineering workshop.  The team took with them the Academy’s racing mascot ‘Derek the Bobcat’ and bags of team spirit.

The team entered two races on the day and came 18th place out of 57 teams, competing against private schools and corporates such as Jaguar/BMW –a fantastic result! The team also came home with an award for the ‘Best Presented Team’!  Local company, Kingren Groundworks Limited, has proudly sponsored The Bourne Academy’s Greenpower team, enabling them to purchase branded safety helmets, gloves and racing/pit suits in Academy colours.

It was an excellent experience for the aspiring engineering students, who attend a Greenpower Club weekly to work on the Academy’s Greenpower car. TED Technician Mark Binstead, who runs the Greenpower Club at the Academy, says ‘All in all an excellent day with the students and car and Derek of course looking amazing. Students were impeccably behaved, professional, and were full of team spirit. As a consequence the judges voted unanimously that the team should be given the Best Presented Team award.’

Not only has the recent success attracted further private donations from parents, but another local school has donated two additional chassis for the Academy to develop and use to expand the team. The Bourne Academy Greenpower team are looking forward to the next race in June at Goodwood.