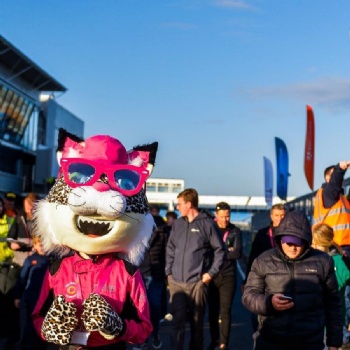 The Academy took two cars to the finals, the F24 scratch built car called ‘Bourne Bobcat’ and ‘Bourne Boxer.’ This international final is the furthest the team has ever got in these national championships and a proud testament to the efforts of the team where Engineering is one of the Academy’s official specialisms.

The team had a fantastic day and came home with the special 20th anniversary international ‘Best Mascot in the World’ Award, for ‘Derek’ the Bobcat. TED Technician Mark Binstead, who runs the Greenpower Club at the Academy, says ‘2019 has been an amazing year for The Bourne Academy's Greenpower Team with both the scratch-built "Bourne Bobcat" and kit-car "Bourne Boxer" making it to the 20th anniversary International Finals at Silverstone Motor Circuit. The students demonstrated an incredible team spirit and both cars put in record-breaking performances. Everyone had fantastic day which was topped off by "Derek the Bobcat" being crowned International Greenpower mascot of the year!’

This year marks the 20th anniversary of the Greenpower Education Trust, a UK based charity inspiring young people to excel in STEM subjects and careers in engineering. The Bourne Academy entered its first Greenpower event in 2012 with the support of the Canford team, the Academy’s sponsor school. Canford School bought the first kit car, ‘Bourne Bullet’, for The Bourne Academy, kick-starting a fantastic opportunity for students.

Back in May, the team also came home with an award for the ‘Best Presented Team’!  Local company, Kingren Groundworks Limited, has proudly sponsored The Bourne Academy’s Greenpower team, enabling them to purchase branded safety helmets, gloves and racing/pit suits in Academy colours.

Taking part in Greenpower has been an excellent experience for the aspiring engineering students, who attend a Greenpower Club weekly to work on the Academy’s Greenpower car and help fund the works.

Not only has the recent success attracted further private donations from parents, but another local school has donated two additional chassis for the Academy to develop and use to expand the team.