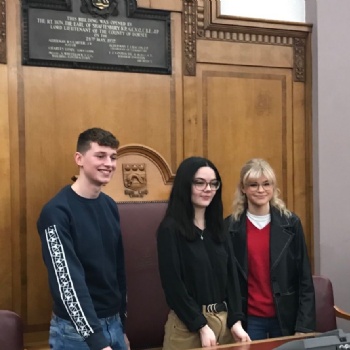 The Bourne Academy is proud and delighted to announce that a Sixth Form student, Sarah Lockard, has been elected to the Poole UK Youth Parliament.

This is the first year that a student from The Bourne Academy has taken part in the Youth Parliament process. The entire Academy community rallied behind our candidate, with many students using their vote to supporting Sarah.

Sarah believes that young people need to play a more active role in shaping their future and says in her election video; ‘If you don’t like it, do something about it’. Sarah wants to protect the planet and the animals on it by reducing single use plastics in schools and promoting sustainable living. Sarah is also very keen to improve mental health training for those working with young people.

Staff and Students at The Bourne Academy are so proud of Sarah, who has an exciting year ahead including visits to London.

Principal, Mark Avoth said; ‘We are so proud of Sarah for being elected to UK Youth Parliament. The issues raised in Sarah’s campaign resonated with young people from The Bourne Academy, even receiving votes from other schools. The Bourne Academy is already working to reduce use of single use plastics on site and our staff are continually developing skills to deal with mental health issues in young people’.