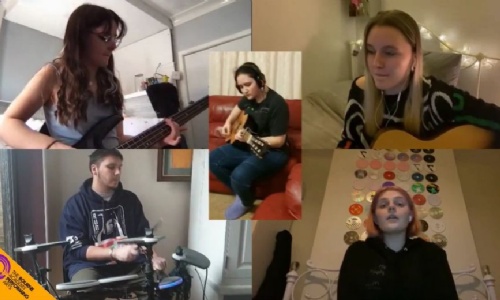 When the UK Government announced school closures and another national lockdown, The Bourne Academy’s music department decided that this would not stop musical performances for their students. The Academy was due to have held concert performances, but with social distancing measures still in place for the foreseeable future, the events have not been able to take place in the traditional sense, so following the success of The Academies previous online concerts in April & May of last year, they have two more wonderful performances via Facebook Live.

Students have once again been rehearsing and recording performances at home. The videos are then put together by Academy staff to create a concert; the previous concerts reached almost 1000 views in the first hour and led to many more engagements and positive comments from the Academy community.

‘Rockdown Sessions’ give a brilliant opportunity for students to continue developing their performance skills while in lockdown and a chance to share their work with families, staff and peers. The music department has been inundated with so many fantastic performance videos that the concert is taking place over two nights, Wednesday 10 and Thursday 11 February.

Head of Visual and Performing Arts, David Mastrocola says ‘’We are all incredibly proud of the students for taking part in what has been a very difficult time for all of us. Hopefully these concerts will give the students, staff, and their families, a degree of escapism for a couple of hours where they can enjoy watching themselves and their peers perform.’’