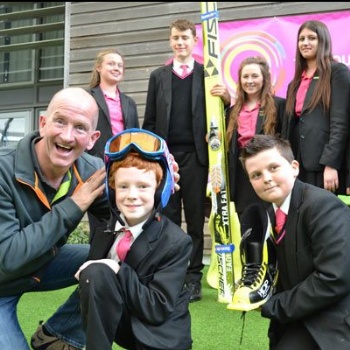 Eddie enjoyed a lunch with selected talented sports students before showing clips from his recent biographical film 'Eddie The Eagle' starring Taron Egerton as Eddie and Hugh Jackman, who played his coach.

Eddie went on to give a Q and A session to Year 11 students, inspiring students to 'follow their dream and not give up'.

Eddie rose to fame in 1988, when he became the first competitor to represent Great Britain in Olympic Ski Jumping.  Finishing last in the 70m and 90m events at the Calgary Olympics, he became famous for being the underdog.  He soon gained followers around the world who praised him for his true Olympic spirit as an amateur athlete wanting to compete and never giving up.