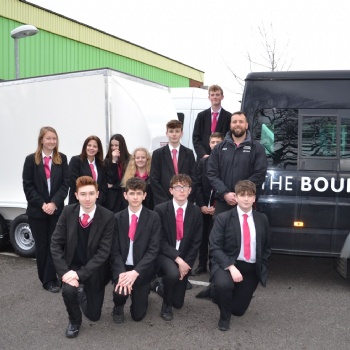 The Bourne Academy is delighted to announce that it has received a grant from The Duke of Edinburgh’s Award’s (DofE) Diamond fund. The fund will enable the The Bourne Academy to support students from all backgrounds, who would like to participate in the DofE awards scheme. The grant will support The Bourne Academy’s ‘Bourne to Paddle’ project.

Through The Bourne Academy’s Bourne to Paddle project, students will develop life-changing skills such as communication, resilience and teamwork; create new friendships, and gain the confidence to reach their potential. Mr. James Short from The Bourne Academy says ‘Since we started the Duke Of Edinburgh’s Award at The Bourne Academy, we have witnessed participants change character for the better. Students that were lost and really did not know themselves have turned into confident, hardworking students with a love for their community, sports, learning new things and the great outdoors. This was achieved through completing the 4 sections of their DofE Awards, Volunteering, Physical, Skill and Expedition. The grant money donated by the Duke Of Edinburgh’s Award will help more of our students gain access to the Award by allowing us to run all 4 sections in house with our own kit and qualified staff’.

Through its Diamond fund, the DofE will be investing a total of £3 million over the next four years to increase the number of disadvantaged young people starting their DofE from 50,000 per year to 70,000 by 2021. The £3 million is made up of £1.5 million raised by over 15,000 supporters in the DofE’s Diamond Anniversary year (2016), £1 million from the #iwill fund for England, a joint initiative from The National Lottery and Department of Culture, Media & Sport, and additional DofE donations to double Diamond Anniversary fundraising in Wales, Scotland and Northern Ireland. #iwill is a UK-wide campaign, which aims to get 6 out of 10 young people involved in social action by 2020.

The DofE is widely acknowledged as the world’s leading achievement award for young people. DofE programmes enable any young person, age 14-24, to develop key skills for life and work such as confidence, commitment and team working. Those who achieve a Bronze and Silver DofE Award will volunteer, learn a skill, get fit and undertake an expedition in wild country. Those who achieve a Gold Award also take part in a week long residential.

There are currently around 420,000 young people doing a DofE programme across the UK through a variety of centres including both state and independent schools, special schools, businesses, prisons, young offender institutions and youth groups.