Our Greenpower Team is ranked 27th Best in The World!

Greenpower is a national competition in which schools, colleges, universities and businesses design, build and compete in electric racing cars. One 24 v Fracmo DC electric motor and two 12 v Yuasa batteries provides the power and is standard for all race entries. The challenge is for individual teams to design all other features - chassis, wheels, steering, electronic management, braking, bodywork, telemetry etc. to ensure their car is the fastest. Races take place at circuits all over the country at legendary venues such as Goodwood and Castle Combe. The regulations are as strict as those in Formula 1 and safety is paramount.

Competing at Greenpower events is a logistically complex and expensive undertaking. A huge investment of time, effort and money goes into the design and build of a Greenpower car. Once built, cars must be tested and retested and finally made race ready. Once registered to race, team members must be clad and helmeted and Greenpower cars must be transported to events all over the country along with tools, spares, drivers, pit-crew, design portfolio, chairs, gazebos, insulated battery boxes, umbrellas, cameras, registration paperwork and refreshments. On arrival, there is a frantic jostling for position in the queue to pass inspection and be declared fit to put in a few practice laps before the real racing has even started… 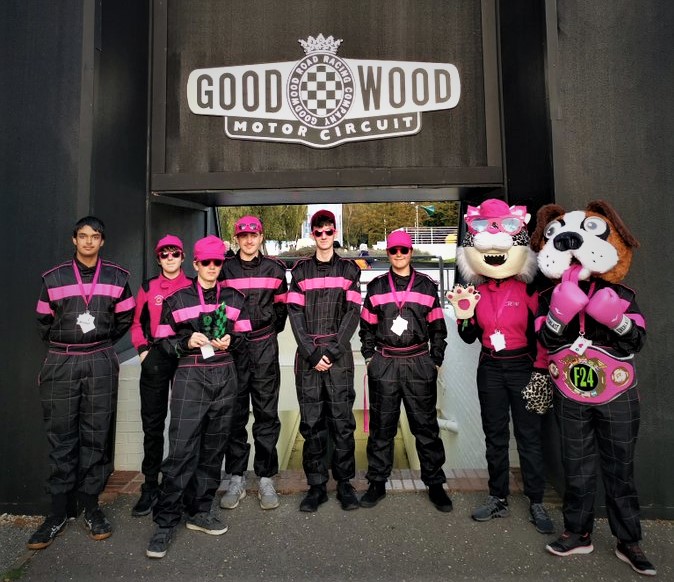 At the Greenpower International Finals held at the Goodwood motor Circuit on 10/10/21 there was plenty of drama with the Bourne Bobcat being involved in a high speed crash and needing emergency repairs.

Both the Bobcat and the Bourne Boxer performed competitively, with the Bobcat ranking 19th best scratchbuilt team and the Boxer, 26th best kitcar team on the international stage.

The Bourne Academy Team members were praised by the international judging panel and event sponsors for their “behaviour, professionalism, teamwork and courtesy” and were the proud recipients of the highly coveted “Best Presented Team” trophy.

Prior to the COVID pandemic, The Bourne Academy Greenpower team had been busy modifying the Bourne Boxer (kit car) in order to make it lighter and faster. In addition, ex-Bobcat crew members had been designing a chassis for their new 2020-2021 scratch-built car.

Sadly, Greenpower racing is effectively on hold during 2020. Short sprint race events will be run at the Castle Combe and Goodwood circuits however The Bourne Academy Greenpower Team has taken the decision NOT to attend either of these limited events for logistical and safety reasons. However, the team very much looks forward to racing again in 2021.

The 2019 season was the record-breaking best yet for The Bourne Academy’s Greenpower Team. During the season the scratch-built “Bourne Bobcat” and kit-car “Bourne Boxer” competed with the nation’s best at top venues such as at Goodwood Motor Racing Circuit and Dunsfold Park (location of TV’s “Top Gear” test track). With outstanding performances from both cars, The Bourne Academy Greenpower Team was delighted to be informed that both Bobcat and Boxer had qualified for the hugely prestigious 20th Anniversary 2019 International Greenpower Finals to be held at the legendary Silverstone Circuit.

Sporting their now famous pink suits, helmets and gloves, The Bourne Academy racers arrived at a sunny Silverstone at 7.30am in readiness for a long day of practice laps followed by two gruelling 90-minute races. Sharing the same paddocks used by Formula 1 teams, the drivers and pit crew made the final adjustments to the two cars before submitting them both for pre-race scrutineering – a nerve-wracking MOT for electric race cars – agonizing for the pit mechanics but actually designed to ensure the safety of all competitors.

Earlier in the year during the Goodwood Season Opener, the Bourne Bobcat had smashed the previous Bourne Academy GP record, coming 9th in the scratch-built category and the Bobcat crew, including Derek the Bobcat mascot, were keen to get racing. The Bourne Academy students were supported by a healthy number of friends and family at Silverstone and with their trademark team attire were subject to plenty of attention from photographers and TV crews.

Soon, racing was underway with both Bobcat and Boxer fending off attacks from many of their old rivals. The good weather held out and both cars put in impressive performances in race 1. With a break for lunch and for the F24+ (Sixth form and University) teams to race, the Bobcat and Boxer teams were keen to tweak their cars in preparation for the main event, The International GRAND FINAL.

And then the heavens opened. Thankfully, by the time the big final race got underway, the rain had stopped but the track was still wet, and it wasn’t long before cars were skidding off the track and into each other. The Bourne Boxer was clipped by another swerving competitor and lost its nose cone. A quickfire emergency pit-stop later and the Boxer was back and racing. Competition was fierce, with cars from as far away as China, South Africa and the USA truly making it an International Final.

When the chequered flag fell, both the Bourne Bobcat and the Boxer were still flying, having put in outstanding performances. While the judges checked over the placings and viewed all the results, the team had time to calculate that the scratch-built Bourne Bobcat Team ranked 27th IN THE WORLD with the kit-car Boxer Team 29th.

With 266 entrants from the UK alone, this ranks as The Bourne Academy Greenpower Team’s most convincing performance to date and a firm foundation on which to build its 2021 campaign.

At the award ceremony, prizes were given for first, second and third with the usual private schools picking up the honours. The Bourne Academy team missed out on “Best Presented Team” by a whisker, having won it at Goodwood earlier in the year but came away with top prize in the mascot category with “Derek the Bobcat” being crowned International winner – the best Greenpower mascot IN THE WORLD!

Taya Johnson (aka “Derek the Bobcat”)

Work still goes on behind the scenes and Greenpower ACE will hopefully resume soon. The Boxer should be fit to return to racing duty in 2021 and the team is very excited about the new scratch-built car which hopefully will be completed in time for it to appear at an event alongside the Boxer.

The record-breaking Bourne Bobcat is currently semi-retired but can be viewed, wearing race number 46 and International Finals livery, in the foyer of The Bourne Academy.